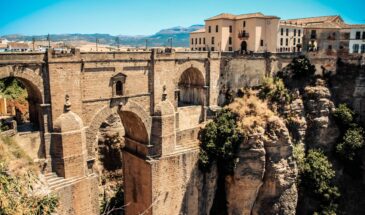 The area of the Pueblos Blancos is located between the provinces of Cádiz and Málaga and is so called because of the inhabitants’ custom of painting the houses white and colouring the beautiful patios with many flowers.

The vision of these white houses that seem to climb the surrounding mountains is impressive.

In the streets of its towns you can imagine what daily life could be like in the days of Al Ándalus. Its economy is linked to olive cultivation and the trade of producing leather articles.

Ronda is one of the most famous towns on the route of the white villages, a few kilometers from the Costa del Sol, in the province of Malaga.

The city is located on a plateau with an impressive deep Tagus caused by the Guadalevín River, which divides the old town in two.

Ronda has seen, over the centuries, the passage of various cultures: Celts, Phoenicians, Romans, Arabs have left their traces and its historic center has been declared an Asset of Cultural Interest.

During our visit to Ronda we will visit the oldest bullring in Spain dating back to the 18th century. We will take a walk through the white streets of its old town to then enter Casa del Bosco, a beautiful manor house, built at the beginning of the 20th century.

Our guide will take us to the Palacete de Mondragón, the old palace of the Taifa kingdom of Ronda.

Free time to eat, shop and enjoy the beautiful views of the surroundings from different vantage points in the city.

Visit the white town of Zahara de la Sierra and continue the route to the Sierra de Grazalema, where we will discover its forests, the Green Throat and where we will observe the flight of vultures.

VISIT TO GRAZALEMA AND RONDA

The path continues to the town of Grazalema that gives its name to the natural park and after visiting it we continue to Ronda, a beautiful city full of history with its historic center declared an Asset of Cultural Interest.

The guide will take us through the streets of the center, and then we will have free time to discover the charming corners of the town.

Pick up in Seville at the address defined by the client. 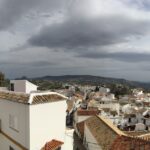 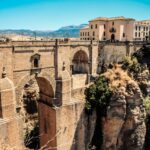 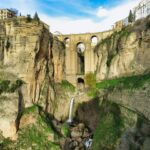 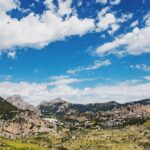 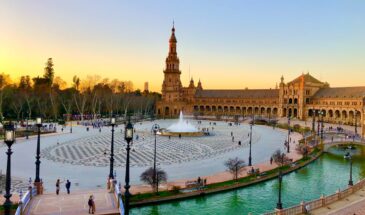